So today is Diwali. The famous Indian festival of lights! In Indian households around the world you will find people lighting Diyas, eating sweets and special foods, lighting fireworks, giving gifts, and wishing each other a prosperous time. There are three major religions that celebrate Diwali, Hindus, Jains, and Sikhs. Each with a different tradition.

Here is the Sikh tradition: 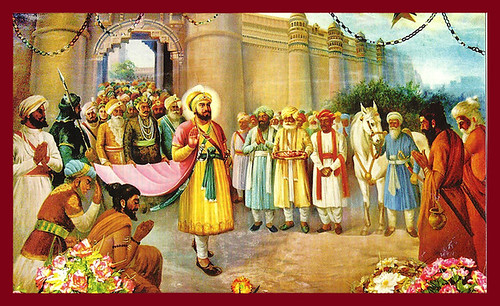 For Sikhs, Diwali is particularly important because it celebrates the release from prison of the sixth guru, Guru Hargobind, and 52 hindu princes with him, in 1619.The Sikh tradition holds that the Emperor Jahangir of the Mughal Empire had imprisoned Guru Hargobind and 52 princes. As political hostages. The Emperor was asked to release Guru Hargobind which he agreed to do. However, Guru Hargobind asked that the princes be released also. The Emperor agreed, but said only those who could hold onto his cloak tail would be allowed to leave the prison. This was in order to limit the number of prisoners who could leave. Guru Hargobind had a cloak made with 52 pieces of string and so each prince was able to hold onto one string and leave prison. The kings/rajahs were freed and the Guru became known popularly as the “Bandi Chhor” (Deliverer from prison). He arrived at Amritsar on Diwali day and the  Golden Temple was lit with hundreds of lamps to celebrate his return. Hence the day came to be known as the “Bandi Chhor Divas” (“prisoner release day”, “freedom day”). This tradition continues today.

So Today we will eat both fresh made Indian desserts like Gulab Jamun and store bought ones like Papdi. I will made a special dinner, and then we will go to Gurdwara to light our candles in memory of that wonderful day! I wish I was in India for this festival because it really is beautiful to be surrounded by so much light and happiness! All those firecrackers, events, party’s, beautiful clothes, and food! It is on my bucket list to spend a Diwali in India before I leave this world.  Today I will enjoy the love of my family on this prosperous day!

Happy Diwali to all my readers, may the light of Diwali fill your homes and heart with happiness and prosperity!

A photo from our Diwali last year

VOTE FOR ME, BEST NEW BLOG